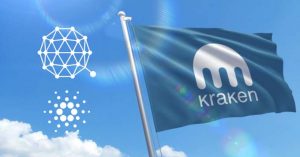 Kraken Digital Exchange, one of the oldest crypto exchanges founded in 2011 is in talks with Fidelity, Tribe Capital, and General Atlantic as lead investors in a new funding round with a target valuation that could go upwards of $10 billion as per a Reuters report. The news comes right after Coinbase SEC’s S-filing for its public IPO.

Kraken Processed $56 Billion Worth of Crypto in January 2021

Kraken is one of the oldest Bitcoin exchanges and now offers a wide range of digital asset trading services. The exchange accounted for one of the largest spot trading volumes and rank among the top-10 platforms in terms of the Bitcoin Futures market. The said report also noted that the $10 billion valuations which are nearly double its earlier estimates, could go up even higher as the valuation is not confirmed.

The firm’s spokesperson back in February revealed that the platform processed $56 billion worth of cryptocurrencies in January. The platform is currently working towards increasing its operations capacity owing to the growing demand for cryptocurrencies this bull season.

The exchange was recently at the center of a controversy when ETH price fell below $700 in a bizarre price crash. Many believe the crash occurred due to a malfunction in Kraken’s trade engine.

Kraken Ezchange’s reported fundraising news comes right after Coinbase public filing, however, the more important factor to note here is the growing valuation of crypto companies this bull season. A reported off-market valuation of Coinbase is said to be worth $100 billion. The said valuation could not have been possible a couple of years ago, however, this bull season crypto exchanges registered multi-billion dollar spot and futures volume in a single session which is quite evident of the significant rise in trading activity that can be directly attributed to the large influx of new traders.

Kraken being another exchange with a similar reputation could see its valuation go up to $20 billion posts the fundraising round.

The post Kraken Following Coinbase’s Footsteps, Planning to Raise Funds With a Valuation of $10B appeared first on Coingape.