Bitcoin (BTC), the world’s first digital currency has notably outperformed other institutional assets in the first quarter of 2021. The ongoing parabolic run in the price of the cryptocurrency, though, has reignited the talks of it being a bubble amongst the coin’s critics, has endeared it more to institutional investors, some of whom are using it as a hedge against inflation.

The world economy is still healing from the pangs of the coronavirus pandemic as governments around the world continue to roll out fiscal stimulus to ease businesses from the effects of the virus. While many businesses remain strained out of cash, the few with cash reserves need to make the hard choice with respect to where to invest the cash.
Often the more traditional assets appear unattractive due to low-interest rates, further accelerating the embrace of Bitcoin and cryptocurrencies as an investment option in general. As highlighted by the Binance cryptocurrency exchange, BTC recorded more than a 101% return on investment in the first quarter. 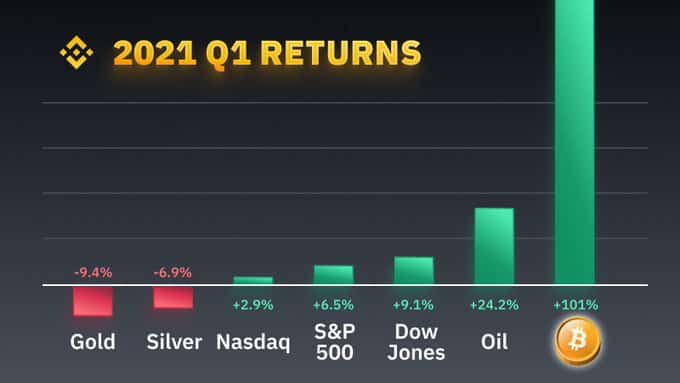 Gold, Bitcoin’s core rival as a hedge against inflation, saw a negative growth trend of 9.4% while oil soared 24.2% during the quarter. The Dow Jones Industrial Average, S&P 500, and the Nasdaq Composite recorded 9.1%, 6.5%, and 2.9% growths respectively.

In the early years, Bitcoin was mostly pushed by retail investors or users by the narrative is changing today as there has been a wide influx of institutional investors in the past year to date. While business intelligence and software firm, MicroStrategy Incorporated pioneered the corporate investment rally, other top multinationals including Tesla Inc, and Square Inc amongst others are also decisively taking a position with Bitcoin.
As the debate heats up with respect to the roles of Bitcoin and gold as a hedge against the rising global inflation, investors are beginning to weigh in on the scarcity of the former as a positive factor fueling the gradual exodus of investments away from the latter. The obvious favor BTC is receiving from both retail and corporate investors has ignited the debate that suggests the cryptocurrency’s current $1.1 trillion market cap will soon surpass Gold’s $11 trillion market capitalization.